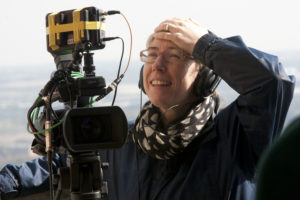 Michelle Deignan makes moving image, photographic and print works, for gallery exhibition, for cinema and for other screening contexts. These works critically examine the production and dissemination of culture now and historically, touching on subjects such as local and international identity, nationalism, feminism, class politics and aesthetics.

Many of her works have looked at the depiction and comprehension of public space and landscape. With moving image she creates factual and fictional narratives that present alternative experiences of land, place and identity. These stories include ‘A Glimpse of Common Territory’ where fictional 19th century characters are trapped in a 20th century modernist industrial tower within a 21st century house estate; and ‘Looking for Gary’ where she searches a street in London for a man called Gary to replace another man she can’t get access to. These films feature the triumphs and failures of protagonists struggling to be seen, remembered or heard as they fight for agency. In 2013 Michelle her first documentary feature,‘Breaking Ground: the Story of the London Irish Women’s Centre’, Her moving image work is distributed by LUX.

She is Lead Tutor for Documentary at MET Film School Short Courses London and Experimental Film Tutor for BA Filmmaking at MET. She also teaches regularly at NCAD Dublin, University of Sussex, Duncan of Jordanstone College of Art and Design and Winchester School of Art. She is a former Tutor at Ruskin School of Drawing and Fine Art Oxford University and a Lecturer at University of Greenwich.