The Crawford Art Gallery in partnership with the Office of Public Works, is pleased to present an
exhibition of sixteen contemporary artists entitled Prelude Speaker: Contemporary Castletown from April 29
to June 30, 2013 in the stunning setting of the historic Castletown House – in Celbridge, Co. Kildare. Castletown House is Ireland’s most important and largest eighteenth century Palladian style house built between 1722 and 1729 for William Conolly (1662-1729). The son of a native Irish innkeeper from Ballyshannon, Co. Donegal, he amassed huge wealth through his career in law and dealing in forfeited estates after the Williamite wars. The title of the exhibition Prelude Speaker:Contemporary Castletown alludes to Conolly’s appointment as Speaker of the Irish House of Commons in 1715, before becoming one the three Lord Justices who administered the country during the frequent absences of the Lord Lieutenant.

Anthropologist Frances Larson has stated “objects are full of ambiguities and entangled histories.They tend to undermine the categories we provide for them and lead us down unpredictable pathways as we learn from them”. By exhibiting historical artefacts and contemporary art works together, the exhibition is an attempt to provoke dialogues which challenge traditional exhibition boundaries and to nurture relationships with history. The elaborately decorated and specific function of each room in Castletown provides an irresistible contrast to the more commonplace white cube galleries where contemporary art often resides.

The works selected gently evoke histories and incidences of Castletown’s past as well as creating subtle synergies with the present. Touching on the possible past times and preoccupations of the inhabitants of Castletown Michelle Deignan’s film Her Fanciful Digression imagines a conversation between 19th Century Irish feminist Anna Doyle Wheeler and English landscape painter John Constable and considers the aesthetics of romanticism within the context of cultural, political and economic changes of the time. Eoin Mc Hugh’s work reflects upon the enlightenment and its scientific classification of the natural world whilst Paul Nugent and Blaise Drummond’s paintings explore visual history to expose truths about memory and the veracity of representation. In the splendidly elegant Long Gallery, digital photographs by Gerard Byrne of contemporary Venice are juxtaposed with three exquisitely crafted Murano glass chandeliers shipped to Castletown in the late eighteenth century by the incumbent of the house, Lady Louisa Conolly. Both elements represent the histories and ideals of an Italian aesthetics and aspirations.

By contrast, Patrick Jolley, Rebecca Trost & Inger Lise Hansen’s video Hereafter brings to the mind the last century when Castletown fell into disrepair effortlessly resonating with the current economic climate. Marianne Keating’s commissioned work situated in the Print Room (the only example of a complete eighteenth century print room in Ireland) along with Felicity Clear and Jennifer Trouton’s work allude to the harsh realities of working and living within – and the lack of work without – Castletown’s boundaries. Perception is a connecting thread through Maud Cotter, Mary FitzGerald and Sarah Browne’s respective installations whilst forgotten histories are prevalent in Daphne Wright’s evocative sculptures and Colin O’Connor’s ingenious work ‘Ponder’.To launch the exhibition on the afternoon of Sunday 28 April at 2:30 pm, the gastronomically dadaesque Domestic Godless (artists Stephen Brandes, Irene Murphy & Mick O’Shea) will
present a customarily anarchic High Tea, an installation, questionably fit for consumption, in the
historic Dining Room.

Prelude Speaker: Contemporary Castletown also ponders upon the question as to whether we should let properties like Castletown House speak for themselves or whether we should interact with them and allow them to perpetuate the culturally dynamic role they had in the past? Through video, sculpture, photography, installation and painting Prelude Speaker aims to bring new audiences to this historically charged setting and provides an opportunity for both emerging and established artists to show their work in a unique context. 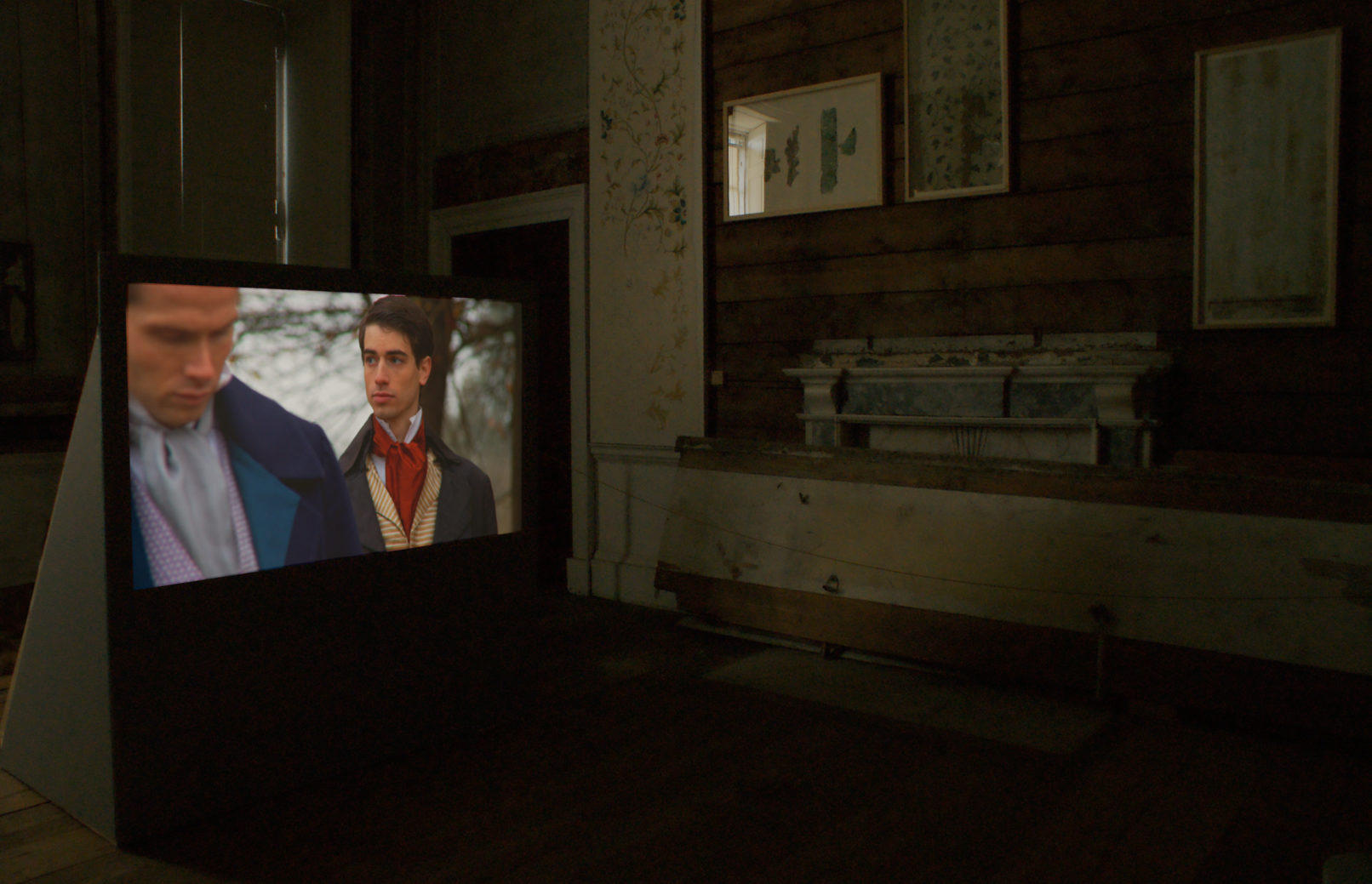 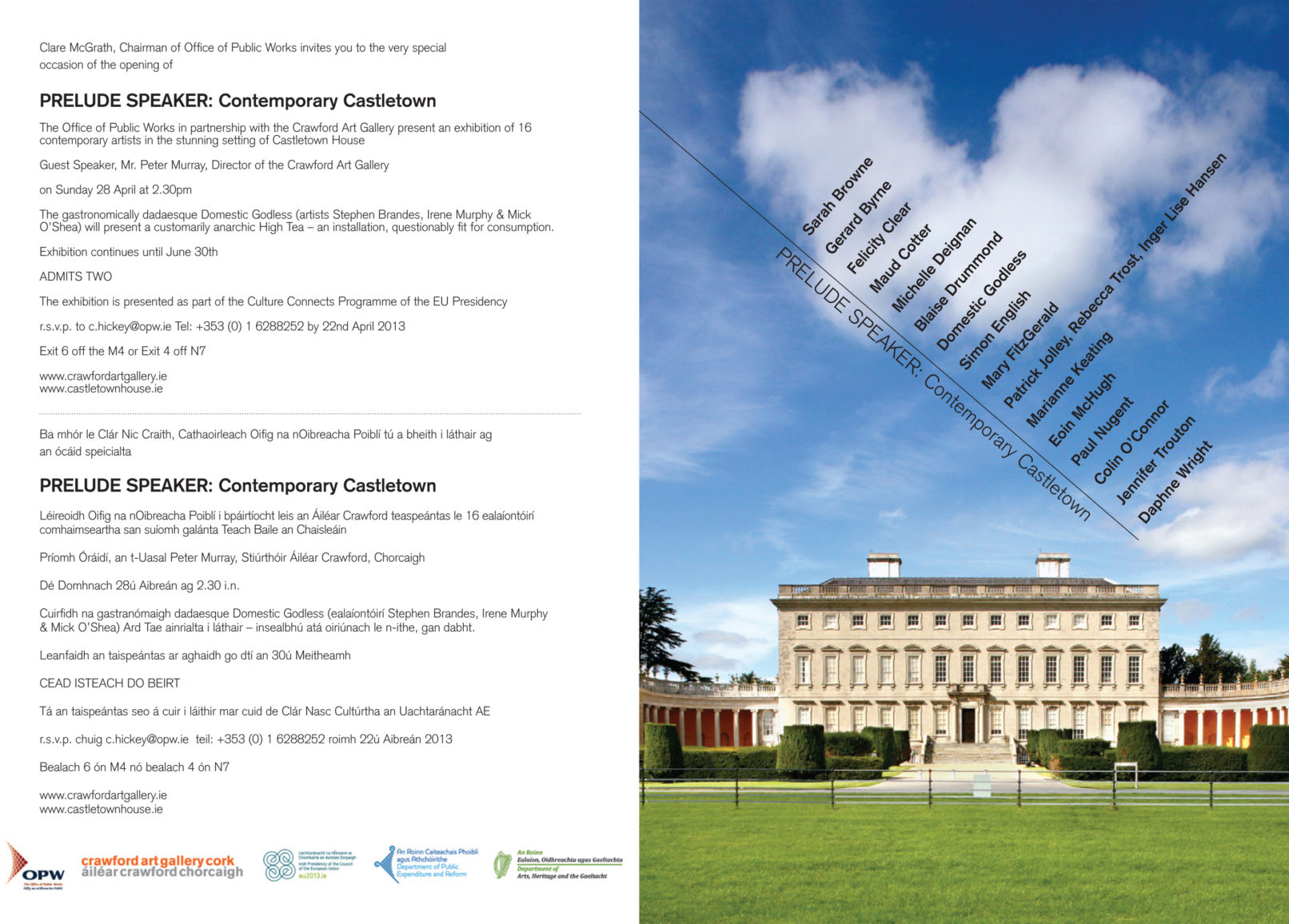